62% of Breakaways are scored by deking the goalie. Sean teaches over 30 different ways to score on the goalie using a planned fake or deke.

This DVD is now available as Video-on-demand and can be accessed anywhere, anytime and across all compatible devices.

Sean Skinner has conducted a comprehensive research on this subject of Breakaways from over 50 years of printed hockey books, videos and coaching materials. He has found there to be very little information on this topic for players and coaches, yet, we find breakaways occurring in almost every game, and penalty shots or shoot-outs deciding the tie breakers in key tournaments.

In fact, in one point during the NHL season last year there were 19 penalty shots and only 3 goals. Players and coaches need to know how to score on the breakaway and how to be successful on the penalty shot or during the shoot-out competition. The body of literature up to this date has basically taught a player that you react to the situation. 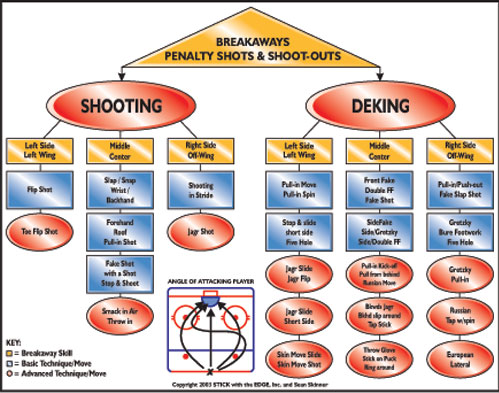 This video will teach players and coaches the scoring principles for breakaways and penalty shots in a scientific progression. It is all based on the flow chart below. Players will learn what options they have from different attack angles, when to shoot or deke, and which moves score more often. By understanding why certain movements produce greater scoring percentages players can learn to increase their scoring habits and win the shoot-out or score on the breakaway.

CHAPTER 1 – Theory of the Breakaway

CHAPTER 2 – Shooting on the Breakaway

CHAPTER 3 – Deking on the Breakaway/Shoot-out