This 2′ hardwood ball is the BEST tool that a player can use to develop soft, quick hands.

Think of the Swedish Stickhandling ball as the ‘Speed bag’ of stickhandling training. Use this ball 10-15 minutes a day and you will see a dramatic improvement in the players ability to handle the puck. Every player should carry one of these balls in their hockey bag! They should use it at home, before and after practice and before the game as a warm-up to stimulate the neurological motor system. Don’t be left without the training tool that is giving the other players the winning edge.

European practice secret for over 50 years. The Swedish stickhandling ball is the BEST tool that a player can use to develop soft, quick hands. Used by Swedish, Russian & Finnish players to develop stickhandling skills in a dryland training environment. Ideal pre-game warm-up tool to stimulate the neurological motor system for quick hands. Use this ball 10-15 minutes a day and you will see a dramatic improvement in the players ability to handle the puck. Every player should carry one of these in their hockey bag for use before and after practice. Don’t be left without the training tool that is giving the other players the winning edge.

The Swedish Stickhandling Ball is the overspeed ball for ice hockey because it is lighter than the puck. This ball moves faster than the puck on the ice, making this the BEST hockey practice ball in the world. Do not get fooled by other balls that weigh the same as the puck, because the puck slides on the slippery ice and moves at a faster glide coefficient. When a player uses a ball that weighs the same as the puck on any other surface, they are working against this extra friction producing resistance. This resistance is strength training not hand quickness.

The puck does not bounce unless it is dropped improperly. Therefore, we do not want to use a ball that has bounce. Players have been trying to find a ball that moves like the puck on the ice for quite some time. So, when the N. American coaches learned about the Swedish Stickhandling Balls, and did not have access to them, they started to use a golf ball instead. Many NHL and College player have no idea why they have been using the golf ball, and when they try the Swedish Stickhandling ball they love it because it doest not bounce like all other balls do.

Be the first to review “Swedish Stickhandling Balls” Cancel reply

All Titles Now Available As
Video on Demand

Whatever your level or passion, we’ll help you make huge strides, fast. Take your training with you to the ice, 24/7 access on any compatible device. Instant access to all streaming DVDs and for a limited time when you purchase any VOD title we'll send you the DVD for FREE while supplies last!

Free DVDs are subject to Shipping & Handling Charges. Skinner Hockey VOD is currently available to stream on your mobile devices, on your Mac or PC and compatible TVs via SkinnerHockey.com with an applicable internet connection. Videos are accessible via 3G, 4G, LTE, and WiFi networks. Data charges may apply. 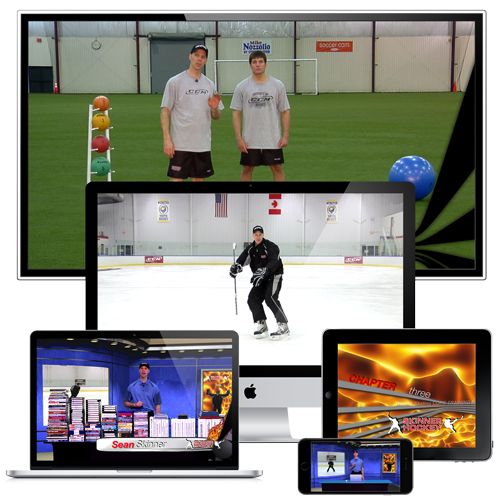